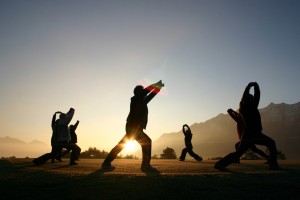 Meditation is an integral part of Traditional Chinese Medicine, and can be practiced as both a still form and as a moving form (the latter of which is often referred to as Qigong). Meditation can help to relax the mind, to awaken the senses and to de-stress, but it can also help with the flow of Qi, which in turn can alleviate a number of symptoms.

Meditation has a strong history in both Traditional Chinese Medicine and in other medicines, cultures and religions. It is one of the most universally accepted forms of alternative medicine, and one that has a long list of benefits. It is also something that everyone can do, something that requires no expensive equipment, something that does not cost anything and something that can be done in just twenty minutes each day.

Meditation is said to have originated in India up to 4,000 years ago. It was prevalent in both the early Hindu and Buddhism religions, and used as a way of attaining peace and enlightenment. In fact, meditation is an essential part of the Buddhist religion and it has been said that the Buddha used meditation to achieve a state of Nirvana many thousands of years ago.

As Buddhism began to spread, it found its way into China, and from here meditation was introduced into the region. This was during the early history of Traditional Chinese Medicine, which means that meditation arrived at the perfect time. Meditation also found its way into Japanese and Korean cultures, which is why this practice has since become so popular in these countries and why it is common in many eastern religions and practices.

Of course, it may be that China had some form of meditation long before this, but there is little documentation from the ancient era and if such a practice did exist, we have yet to find proof.

Only when you have a strong foundation of meditation and exercise, as well as a proper balanced diet, can all of the other medicines associated with TCM work effectively. Meditation can also be used as a means of reflecting and understanding. After all, the basis for all meditation is mindfulness, and this ability to understand and be aware of yourself and your surroundings can help in times of stress, pressure and difficulty.

Meditation is common in the east. As mentioned above, this was down to the spread of Buddhism from India across Asia. It was common in Hinduism as well as Buddhism and other eastern religions, and there are even scriptures that suggest meditation was practiced in the Judaism faith, although that is no longer the case.

The Greek Jewish scholar Philo of Alexandria played a big role in bringing meditation to the west, as his words on the subject, written in 20BCE, were the first mention of meditation in the western world. A few hundred years later, meditation techniques were created by Plotinus, the Greek philosopher, with suggestions that meditation was already somewhat popular at the time of writing. In the middle-ages, meditation spread to Islamic and Christian religions, although it still remained a fringe practice in many European countries.

This changed in the modern era when yoga became common. Yoga is not actually as old as it claims to be and its roots can be traced back just a fraction of what is claimed, but meditation has been practiced for thousands of years and it is these historic ties that attracted so many westerners to it in the 1970s and beyond.

Meditation in TCM can help with a number of ailments, whilst also maintaining a balanced state of being. The most immediate benefits that meditation brings is a peaceful and relaxed state of mind. The more you sit, the more relaxed and content you will feel, and the better you will be at handling stressful situations. Meditation creates an instantly positive affect on blood pressure, heart rate, anxiety and other physical problems. It may even help to kick addictions and bad habits, and to eliminate insomnia.

It is not just about relaxation either, as meditation is popular among athletes as a way of focusing their minds. After all, when a sprinter stands on the blocks and focuses on the race ahead, ignoring the screaming fans, the cameras and all of the other activities, they are effectively practicing a form of meditation. They are able to switch off and on so quickly because they practice meditation on a regular basis.

There is no “correct” way to meditate. You can do it with your eyes open or close, you can sit with you hands by your side or on your lap. The trick is to find a position that is comfortable for you, because if you lock yourself into a position that is uncomfortable for an extended period then you can do more harm than good. You can burn some incense and light a candle to give you something to focus on, or you can close your eyes. Just try not to fall asleep.

Many practitioners find that it is best to sit with their legs crossed (or in the Lotus Position), their hands together on their lap, and their eyes partially closed. However you choose to do it, you should sit in silence, with no noise and no distractions.

It will be difficult to ignore the world and your thoughts, but it will get easier the longer you sit. Breathe slowly and focus on your breath and only your breath. Your mind will wander and this is normal, so try not to get annoyed with yourself and don’t let it interrupt your session.

You can stop when you feel that you have sat for long enough, when your body or your mind tells you to stop, or when you have sat for as long as a practitioner recommends. Typically, this will be for at least 20 minutes.