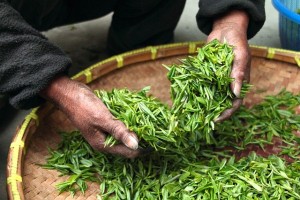 Tea is a staple in the Chinese diet, and it is also plays a crucial role in Traditional Chinese Medicine. Tea has been harvested here for thousands of years, and it has been prized for its health benefits throughout that time. China is the home of green tea and, as well as being considered one of the 7 essential components of a daily diet in China, it has played a big part in the history of this region.

We know for a fact that it has been grown, harvested and consumed here for 2,000 years, and there’s every chance that its history extends much further than that. The legend concerning the origin of this drink says that the emperor, Shen Nung, was resting against a tree as his servant boiled some water. An errant leaf from a nearby plant fell into the water and, being a keen herbalist, the emperor decided to drink the infusion.

This tree was, of course, Camellia sinensis, a plant from which we get most of the tea that we drink (including green, white and black).

Tea, and in particular green tea, is a popular remedy and one that is often diagnosed to treat a number of health conditions. It can help to rid the liver of heat and to calm the body and mind. Unflavored green tea is also cooling, and can clear the senses. Flavored green tea also has its benefits, and the addition of peppermint leaves and other sharp ingredients can give you that extra kick in the morning or during a mid-afternoon lull.

Teas can be adjusted according to your tastes and your needs. For instance, although it is rarely made into a tea by itself, ginger root can be added to any number of teas. Ginger is one of the most popular spices in Chinese Medicine and can help with digestion and inflammation. It also tastes great and adds a fiery kick to any tea.

The term “green tea” is actually rather ambiguous, as it covers a wide range of tea. For instance Matcha, an antioxidant rich tea that is popular in Japan, is considered a green tea, but it bears little resemblance to traditional green teas drunk in China or even in the west. Green tea is regularly drunk throughout the east and is hugely popular all over the world.

Green tea is essentially just tea leaves that have not been fermented. This produces tea that is light green in color, with a naturally sweet and delicate flavor. It is prized for its catechin content, which are antioxidants. These are present in all teas, but they tend to degrade under fermentation and processing, so they are at their strongest in green tea.

Green tea can help you improve your heart health, whilst also regulating blood sugar. Green tea should be prepared with a delicate touch, as over-boiling the water can damage the tea and produce a bitterness that is uncharacteristic. The boiled water should be left for a few minutes before pouring over the tea, after which it can be left to infuse for a further 3 to 5 minutes.

Matcha tea does not require steeping or infusing. This tea consists of finely ground tea leaves, and therefore the tea simply needs to be blended with the water.

Produced in the Yunnan province of China, Pu-erh, also known as Pu’er, Pu-er or simply Puer, is a type of fermented black tea that is popular in the east and is drunk for its unique flavor as well as its healing properties. It is often sold as balls or “cakes”, pressed into hardened forms to make it easier to distribute. Larger quantities can also be sold as bricks.

Pu-erh, much like a fine whiskey or wine, gets better with age and it can be left to mature for any number of years (although commercial varieties are matured for just 4 to 5 weeks). Some of the better teas are aged for at least 15 years, but there are several different maturation methods and some of them claim to be able to mature for just a few months and to get the same results as a 15 year maturation. Older is usually considered better with this tea, so it’s always wise to check the age of the product before you buy.

Pu-erh is as old as Traditional Chinese Medicine and has always been a major component of it. As well as producing a greater number of antioxidants than other teas, it can also help with cardiovascular function. It has been shown to reduce everything from cholesterol to blood pressure, and it can also help with digestion. What’s more, Pu-erh tea has around half of the caffeine that black tea has. To proponents of TCM, Pu-erh tea is as close as you can get to a cure-all.

Pu-erh is made in a similar way to normal black tea, in that it is stepped. It is recommend that the water be just at the boil, which is around 200 degrees Fahrenheit. In Chinese literature, the term used is “turbulent waters”, which refers to the moment the water begins to bubble.

White tea comes from the same plant as green and black tea, but it is the least processed of the three. It is naturally dried in the sun, and is said to create a number of benefits from this. In truth, it is probably no more beneficial than green tea, but this process does impart a unique flavor to the tea, and one that should be experienced by all tea lovers. There is no strict definition of “white” tea, but it typically refers to tea leaves of a light green/yellow color, with an almost straw-like appearance. In many white teas, only the youngest buds and leaves are used, which adds to the delicate flavor and nature of the tea. The brewed drink itself is not white, but yellow.

White tea can be brewed in the same way as green tea.